NOTICIAS. TTE participates once again in the "Offshore Technology Conference" in Houston, USA. - 02/05/2011

Tubos Trans Electric participated once again in the "Offshore Technology Conference" (OTC), held between May 2 and 5 at Reliant Park in Houston, Texas, United Stated. Founded in 1969, the OTC is the world's foremost event for the development of offshore resources in the fields of drilling, exploration, production, and environmental protection. Each year, OTC attracts more than 60,000 attendees and 2,000 exhibiting companies representing more than 110 countries. This year, the event had 78,150 visitors, 8% more than last year, and it was the largest since 1982.

Together with the Argentine Group of Oil Suppliers (GAPP, for its Spanish acronym) and with the support of the Argentine Ministry of Foreign Affairs, TTE was part of this event, in line with its firm commitment towards the development of the oil industry. Participating in this event allowed the company to keep in touch with its clients in the oil industry and to stay current on the industry's latest breakthroughs. 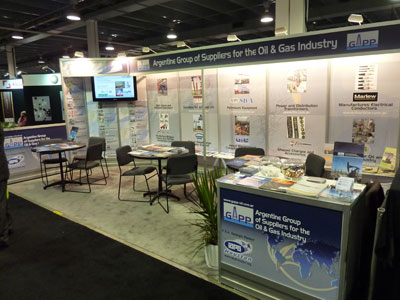